(To find the organ’s expression would be the philosopher’s stone of music.)

My first article provided a brief history of the harmonium from its tentative origin to fully-fledged instrument, highly developed for musical artistry. Let us now explore the practical means of gaining mastery of its musical potential,and starting to become an ‘expressive organist’.

For any organist who would discover the delights of the harmonium and its music, the challenge is to be continually aware of the need to control expression, or dynamic nuance. It is only by mastering the harmonium’s unique capacity for sustained sound and dynamic inflection that the player can use the instrument according to its true nature. Having chosen our stops at the pipe organ we have but to sit back and enjoy the effect (so to speak), but on the expressive organ this is just the first step. To bring the music to life we must be free to play at any chosen dynamic level, and to vary that level at will. This is achieved by the operation of the feet on the pedals, the Expression stop having first been drawn.

An important distinction must be made here between the two systems of winding used in reed organ manufacture: pressure (used for all true harmoniums) and suction (found in American organs and other types). The effects of expression are only available on instruments of the pressure system, on which you will find a stop labelled ‘Expression’, usually placed between the stops controlling each half of the keyboard.

First then, find a suitable harmonium. This may be a matter of local knowledge, so try asking your local Organists’ Association or DOA. For a wealth of instruments, information and enthusiasm visit the Reed Organ Museum in Saltaire, run by Pam and Philip Fluke (full details at end of this article) where you can play a range of different makes and models. These are some of the harmonium makers that you are most likely to find: Alexandre, Cesarini, Christophe & Etienne, Debain, Couty, Mustel, Schiedmayer, and Trayser.

You will need more than one encounter with the instrument to learn control of expression (it took me at least one month of regular practice). Your chosen instrument should have a good, airtight winding system. Test it in this way (as recommended by Alphonse Mustel):

“The pedals must move freely and with perfect regularity. They should return rapidly to the point of repose.”

During the heyday of the harmonium tutors were produced in abundance. Two at least are still available in print:

In addition to these I have been able to consult copies of two other methods by courtesy of the Reed Organ museum:

Reinhard and Hiles both allow that the novice harmonium player’s first attempts may be without Expression, to habituate the feet to a regularly alternating movement of the pedals. Before playing, draw the same stop in both halves (Set 1 makes a good beginning) and move the pedals to fill the reservoir. According to the demands made on the wind by your chosen piece, you will need to pedal simply to replenish the reservoir, which should never be allowed to exhaust itself.
Either foot may begin to press its pedal down. Before the lowest point is reached the next pedal begins its descent. Both pedals are for a moment in use at the same time, then the first pedal returns promptly to its position of rest, ready to take over again. When you come to practise with Expression, the need for this method of achieving a smooth transition from one pedal to the next will become apparent. Every move made by the feet will then be audible as a nuance: for forte the pedals will travel faster than for piano; for pianissimo they will barely move at all.
Suitable repertoire for your first trial can be taken from collections commonly found in organists’ libraries: L’Organiste by Franck and 24 pièces en style libre by Louis Vierne. Choose pieces which use just Set 1 at first, then progress to Sets 1 and 4 subsequently adding Set 3 and finally using the Grand Jeu (Sets 1,2,3 & 4). Make sure you can supply enough wind at each stage before progressing to the next. Any pieces you study now will be reworked later with Expression (with the possible exception of some pieces for Grand Jeu for which it may not be required).
René Vierne’s Méthode contains 20 preludes written as illustrations for each technique discussed; these are polished miniatures in their own right, and 12 pieces “of varying character” provide a treasure trove of little-known but wonderful music. He points out that his Méthode may be used for manual study at the pipe organ as the legato fingering techniques of substitution, sliding from a raised key to a natural, crossing fingers and legato use of the thumb are in common for both organ and harmonium.
As with the study of any instrument, playing position is of crucial importance. Hiles makes this observation:

“There is one important rule which should always be present to the mind: if the strokes of the bellows [pedals] follow one another quickly, and demand much energy, vigour and rapidity, in the movement of the feet, the utmost possible external repose and tranquillity must be preserved. The upper part of the body must remain perfectly quiet… It is an unpleasant, not to say a ridiculous sight, when a harmonium player resembles a weaver, with arms and legs working about. The difficulties must be overcome in a pleasant, easy manner, so as to awaken in the hearer the sense of perfect serenity and enjoyment, as if the tones came from the instrument itself, without any exertion on the part of the player, who must, if possible, appear outwardly perfectly calm and tranquil.”

Choice of seat helps calm demeanor: it should slope slightly downwards and is usually made of wood, though Alphonse Mustel recommends a fabric cover so as to give the player some purchase. Some rubber cushioning between the feet of the seat and the floor will prevent you parting company with the instrument as you play! See Fig 1 for his illustration of posture. 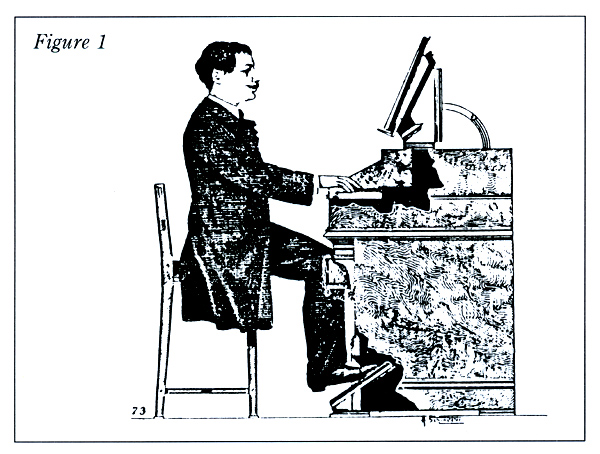 Alphonse Mustel, who gives the most detailed and meticulous advice, will guide our study of expressive pedalling. Here are his ’10 Commandments’ for the feet:

Lesson 1 uniform nuances
Study on one pedal
For one foot only, to gain the habit of natural movement without the difficulty of following with the next pedal.
Draw Set 1, sustain first one, then two, then three notes in the middle range of the keyboard, keeping a constant pressure and controlling the return of the pedal. Repeat 5 to 6 times a day over 2 to 3 days, with either foot singly.
Study on two pedals
The succeeding of one pedal by the other, without shakes, shocks, interruption or hesitation.
The change of pedals should not be audible, but produce an uninterrupted flow of air as if by rotary motion (like riding a bicycle). There are 4 stages:

After three or four weeks of assiduous practice, fortissimo will be a natural development, and should be worked on daily. The final exercise pushes the sound to the limit of maximum sonority.

exercise 10:    hold a full chord on the Grand Jeu, the pedals moving rapidly, faster than reflection or attention allow, giving more pressure than that demanded by the large ensemble of notes. Add any more stops and more notes. The ankle is rigid to transmit the weight of the leg to the pedals.

Daily exercises: mf on Grand Jeu, ppp on Set 5 in bass, fff on all stops.

Lesson 2 varied nuances
As woodwind players vary the sound by means of their own breath, the player alone, without the help of any other artifice and by means as prompt as thought, gives birth to nuance, accent, and the whole range of expression. The pedals of the expressive organ are as the bow of the stringed instruments’.
Crescendo

5-note scale in octaves from tenor and middle
C, played very slowly on Set 1 or 4 with Forté
fixe. Crescendo from pp to ff in a regular
progression.

extend the scale upward, same conditions as
exercise 11. Make sure the maximum dynamic
is not reached before the very last note. 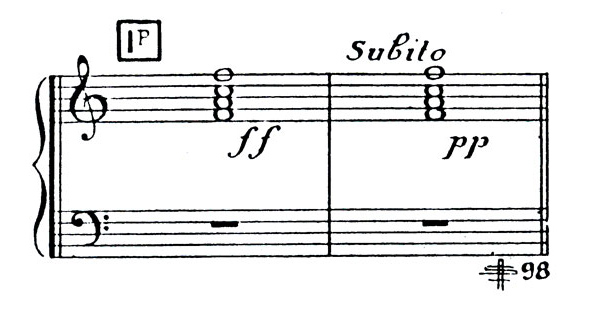 The two chords, which follow each other without interruption, attain the two opposite limits of dynamic nuance.

Once again, achieve this effect solely with the pedals.

Effects of sforzando are achieved from the pedal in action at the time, without any help from the other pedal.

If you have reached this stage, you are well on the way to becoming a harmonium player, or we could say, an ‘expressive organist’. The more subtle effects of vibrato will be discussed next time, as will the use of the Double-expression for those with an art-harmonium at their disposal.

For now, let Alphonse Mustel have the last word:

“The Expressive organ demands a real artistic personality on the part of the player. And it is because this is the instrument par excellence with which the artist can best show his musical temperament, that this organ, obedient to the will of the artist, is only really shown at its best under the fingers of a musician.”

My next article will round off discussion of techniques and continue to explore the riches of the harmonium repertoire. More too on the difference between pressure and suction instruments.