“It is an artist’s instrument: an instrument which responds to all that one asks, when one knows what to ask”

The harmonium exercises an aspect of musicianship too easily overlooked by organists: a continual awareness of dynamic nuance and its role in shaping phrasing and indeed, the very structure of a piece of music. We shall now continue our journey of discovery: just why did the harmonium, an instrument of modest dimensions, fascinate so many of the French organist-composers, from Lefébure-Wély to Langlais?

The answer lies in its expressive capability. As we discovered in the last article, it takes practice to become an expressive organist, but competence will be second nature before long. The aim of this article is to apply basic mastery of the Expression stop (which you will have gained through practising held notes, chords and scales) to specific musical contexts.

César Franck (1822-1890) wrote a collection of pieces which some call the ‘Well-Tempered Clavier’ of the harmonium. In order to fulfil a commission from his publisher for 100 pieces, he worked on these during the last months of his life, at the same time as his Trois Chorals. They were arranged as suites on the Magnificat, with seven pieces in every key. By the time of his death, Franck had completed sixty-three, of which fifty-nine appeared posthumously under the title L’Organiste. Of the remaining intended thirty seven, Franck is reported to have remarked: “Dieu permettra que je les achève…dans son eternité”, As a counterpart to the large canvas of the Chorals, the pieces of L’Organiste show a masterful handling of miniature forms: they are essentially harmonium music, not readily transferable to the organ, and require a refined use of Expression.

Let us take for example the first Suite of pieces in C major and minor. 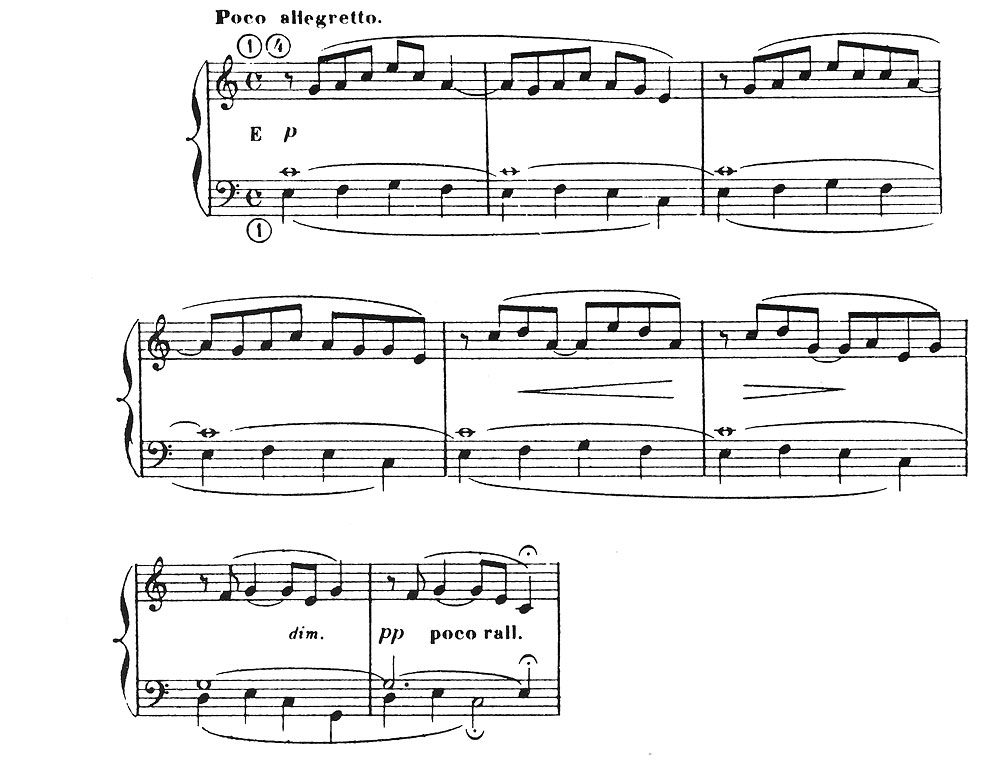 This is registered for RH sets 1&4, and LH set 1. Notice that the last note of the first phrase goes below the break, creating a diminuendo which naturally follows the fall of the melodic line. A very subtle rise and fall in nuance can underline the shape of the melody, usually louder for upward movement, softer for downward. First though, it’s a good idea to establish a level for the prevalent dynamic, which is piano: not too soft, so that you can allow for pp and still get the reeds to speak! Next, see how Franck uses varied repetition, by two-bar then one-bar phrases, finally closing with a diminuendo to pp and poco rall. 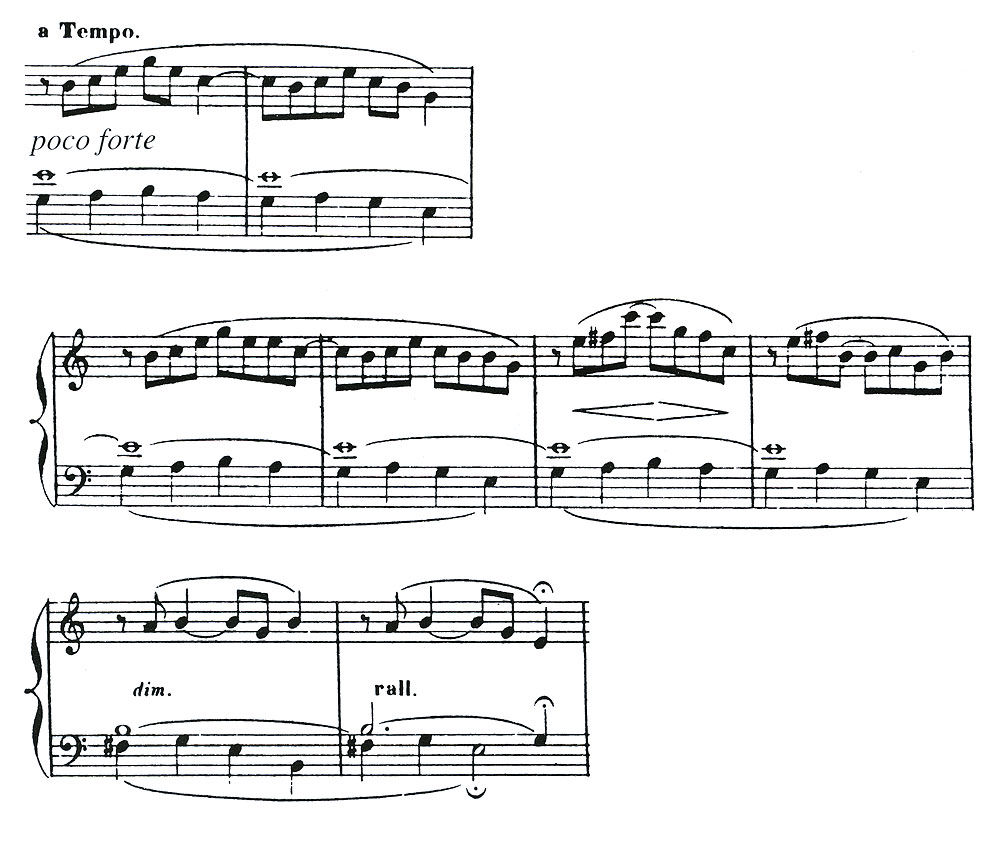 Poco forté reinforces the transposition of the opening to a higher pitch; the high C in the 5th bar of the example receives an extra dynamic boost.

Rhythmic augmentation and melodic variation of bar 15, plus the hairpin signs, all add intensity to the varied repeat.

Repeat of rhythm of preceding 2 bars but now in C major, then preparation for reprise of first section. Again, the second phrase is given a dynamic nuance with the hairpin signs.

In Example 5 we find a reprise of the opening, with crotchet accompaniment transferred to the alto voice. The hairpin crescendo/diminuendo effects in bar 29 emphasise the close dissonance between the upper voices. Molto rall, and probably dim. (though unmarked) bring this perfectly-wrought miniature to a close. Changes in dynamic level help to define the larger sections of the piece, while smaller cresc-dims intensify the expressive intent of Franck’s favourite device of varied repetition. 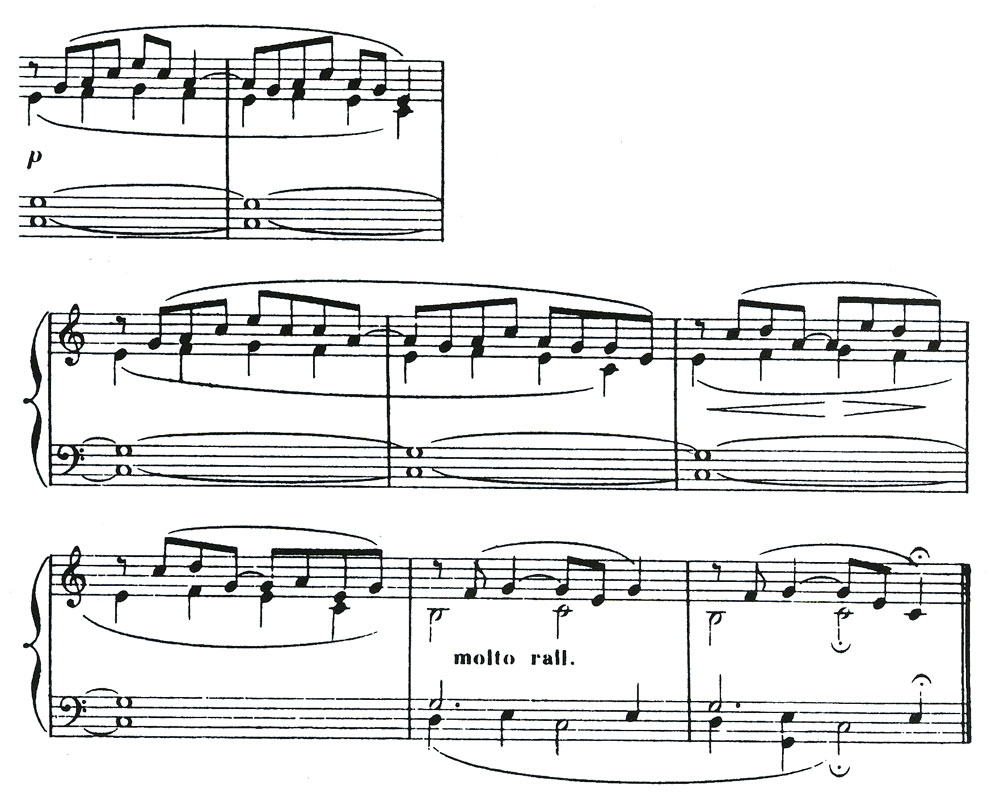 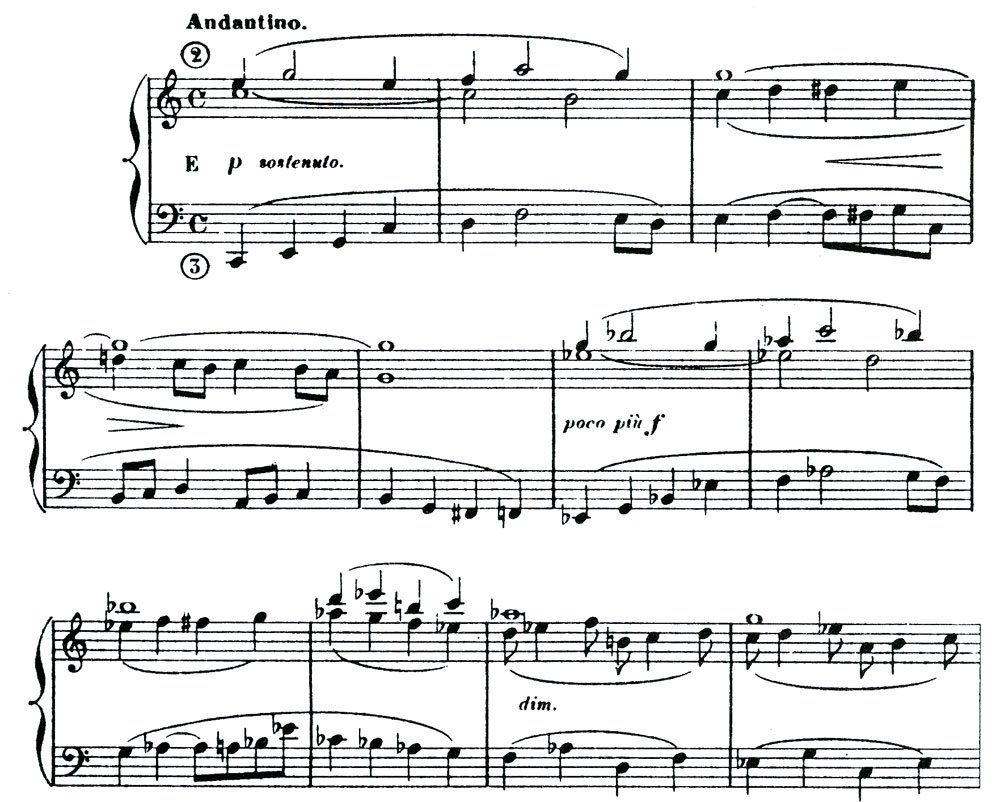 Here (Example 6), the choice of registration, with a different colour in each hand gives the effect of two manuals. With the RH sounding at 16 foot and the LH at 4 foot pitch, try the first 4 bars to see what happens to the lowest sounding part! As in the first piece, poco piu forte is specified as the opening material is transposed up. Space does not allow printing of extensive extracts, so consult your score for the remaining pieces in the suite. In no.3 (Poco lento) the same registration is used to different effect, with four-part harmony on the same stop in each half of the keyboard. The darker set 2 is used for the minor repeat of the opening.

Franck’s subsequent combination of the two sonorities reveals masterful writing for the instrument. The theme of no. 4 (Maestoso) is a transformation of the opening of no.3, (listen carefully to each), giving us the first hint of the cyclic treatment of themes which is richly enacted in the closing Offertoire (see its minor fugal section for another transformation of the theme of no.4, which shares its Grand Jeu registration). Begin by preparing sets 1 and 4 on both sides, draw the GJ this time without Expression, and pedal in advance to fill the reservoir. This will give maximum power to the ff sections. Exchange GJ and E(xpression) for the quieter parts, which will emphasise as much as the registration change the different character of these elements. No.5 is like a piece for two instruments, the LH producing an effect very similar to a piano, with percussion on the staccato chords. Compare this with the staccato chords of the RH in no.6, played on set 2, which does not have percussion.

They need to be played quite loudly to respond quickly enough, and do notice how the style of writing changes to legato once the p section starts. As we have seen, Offertoire is on a larger scale and takes its themes from the preceding pieces in the set. At the beginning of the fugal section in C minor, markings for GJ and ff are missing in the Enoch edition (reprinted by KALMUS).

Expression is used in three ways in the beautiful pieces found in L’Organiste:

special effects on the art-harmonium

The standard model harmonium (with sets 1 to 4 in treble and bass and set 5 in the treble) is adequate for the performance of Franck’s pieces, and for the 24 Pièces en style libre of Louis Vierne. This was the most widespread type, found in churches, homes and salons. The art-harmonium, as we saw in the first article, was distinguished by extra stops and other devices, but most of all by the double expression, also called ‘the expression for the accompaniment’. On instruments by Mustel and other makers who adopted the system, double expression is controlled by a pair of knee-levers, which are latched flat against the front when not required. [Note that knee levers on types other than art-harmoniums operate differently, often bringing on more stops.] Releasing a catch allows these levers to float freely, which inhibits the wind supply, and with it the full sound of the stops, so that only a soft dynamic level can be obtained. Moving the levers outward achieves the gradual restoration of full winding, reaching the normal level when fully open. The purpose of double expression is to allow each half of the keyboard to have different dynamic nuances, independently and easily controlled, as in the case of melody and accompaniment. The expression by pedal is still in overall command and will operate normally on the side whose lever is fully open, double expression being properly used on only one side at a time.

In Example 7, an extract from Louis Vierne’s Carillon, passages marked GR could be brought out by fully-opened knee lever, the held chord on R subdued by floating knee lever. At each change of manual, the knees change their angle to reverse the effect. Hairpin dynamics are achieved by the pedals using Expression as normal. 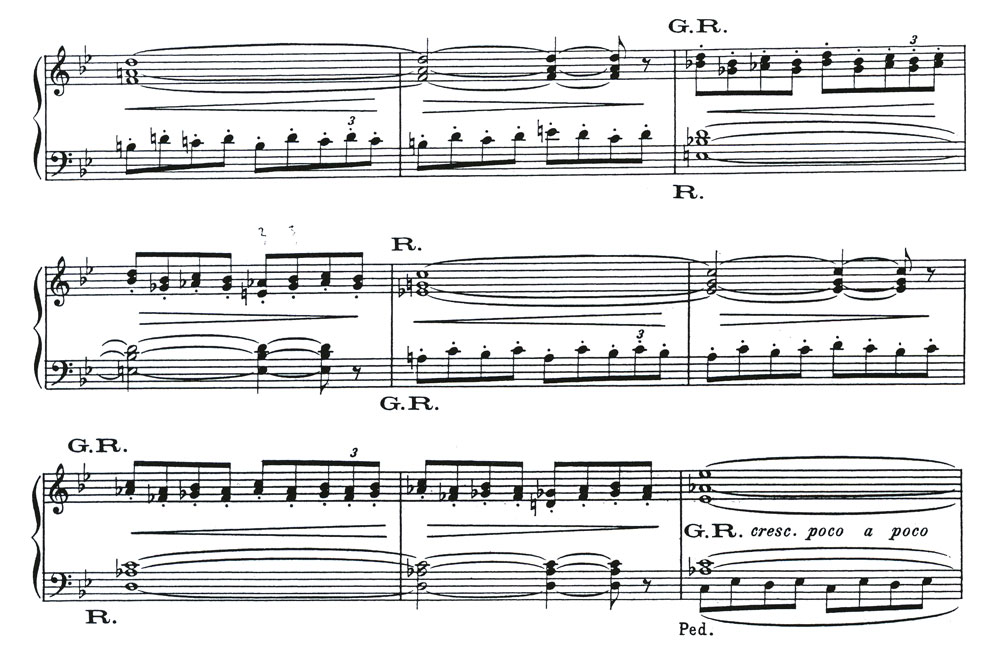 Vibrato applies to single notes or lines, not to chords, and is in fact quite rarely specified by composers. It is also quite difficult to do convincingly, so you might like to wait until you encounter an occasion to use it. If you’re in an experimental mood, you could try this: start with a held note, and let the pedal go down slowly, applying a series of small accents with the toe of the pedalling foot. The pedal should continue its descent and the sound be cyclically cyclically intensified rather than interrupted. Make the accents slow, and evenly rhythmical at first, as you may need to transfer to the other foot at the same speed. Try to maintain relaxation and composure!

Next time we’ll take a step further and look at some music by the composer who took the instrument to its limit -Sigfrid Karg-Elert. This will provide an opportunity to examine the differences between pressure and suction systems, to see how the instrument was used in ensemble and how composers today are rediscovering the harmonium.

I hope all this will inspire and challenge you to try the familiar French pieces discussed on the harmonium: it really is a fascinating instrument, one whose haunting timbres will transform your ideas about this repertoire.

All photos and sound files are free to use non-commercially

Feel free to use any photos as you wish.