“The harmonium is at once a church instrument and a theatre instrument, a drawing-room and a concert-room instrument”

This finale to the series enlarges our view of the harmonium and its music by considering its role as an ensemble instrument, its place in the musical landscape of the early 20th century, and its use today as a medium for contemporary music.

The decades following its invention saw the harmonium well established in domestic, public and sacred contexts. Enterprising manufacturers were quick to see the marketing potential of its moderate size and price as coupled with its several musical functions; the instrument soon found a place in social and secular music-making. One of the most congenial combinations was harmonium with the piano. Widor, Saint-Saens, Gigout, Guilmant, Reinhard and Karg-Elert were among the many composers who wrote original duos, while transcriptions, particularly of movements from Wagner’s operas, were also published by the volume. Rossini’s Petite Messe Solennelle, still popular today with choral societies, was scored for two pianos and harmonium.

Reinhard wrote in his harmonium tutor: “However powerful the tone of the harmonium is, even when played alone, the effect is greatly enhanced by blending it with the piano, when the characteristic differences of both instruments combine to produce upon the listener a most pleasing impression, similar to that resulting from the combination of wind and string instruments in an orchestra.” Franck’s arrangement of his Prélude, Fugue et Variation shows how he effectively featured those ‘characteristic differences’. 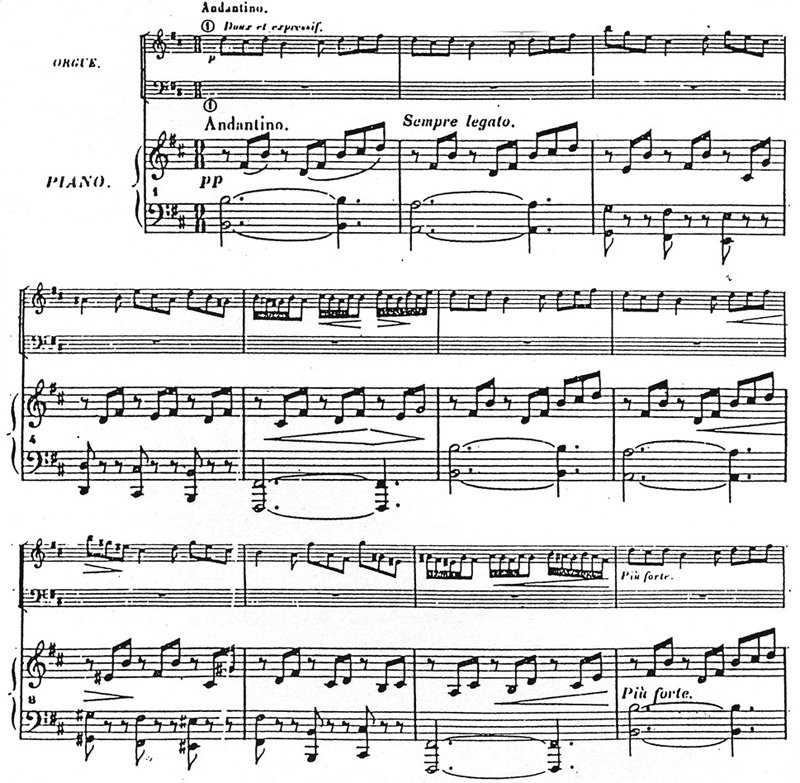 The harmonium is treated as a single-line melody instrument against the accompanying piano. There are many more notated dynamic nuances here than in the organ solo version. The piano alone takes the Lento, with arpeggios at the end of each phrase replacing rests which in the organ version allow for the chords to die away in the acoustic of a large church. The manual parts of the Fugue are given mostly to the harmonium, the piano taking the pedal line with an interesting notational difference in bars 116-119,

indicating a non-legato performance of the bass line. In the transition back to the Variation, the sustained bass notes are given to the harmonium while the rippling arpeggios sound absolutely at home on the piano. This work, so well-known to organists, gains a new dimension from the duo version, in which the lines are so beautifully characterised according to the nature of each instrument.

Chamber music of a high order was composed for ensembles in which the harmonium was an indispensable member – for example Dvorak’s Bagatelles Op. 47 for two violins, cello and harmonium. The sonorities and flexible dynamics of all the instruments are a perfect match. The ability of the harmonium to blend into the background, or take a solo line as required, was exploited skilfully in the arrangements made by Schoenberg and other composers for his Society for Private Musical Performance in the early years of the 20th century. The range of music they arranged for an ensemble of about a dozen players (often with piano and harmonium) was eclectic and to us, rather surprising, including Strauss waltzes, orchestral works by Schoenberg and Webern, and Mahler symphonies.

The turn of the century also saw the recognition of another type of reed organ as an instrument worthy of serious attention: that based on suction rather than pressure. Working on the inverse principle to the harmonium, wind is drawn through the reeds by a vacuum created by the pedals, so effects of expression are not possible to anything like the same degree as on the pressure instrument. Though it had existed for several decades previously, the American organ (so called because it was developed in North America and dominated the market there) lacked a standard specification and therefore a repertoire. The instrument was derided by Alphonse Mustel in his treatise as lacking in any artistic qualities, its principal use being to accompany hymns in Protestant chapels! The issues of standard compass, specification and division into bass and treble were addressed and resolved at a convention of American and European builders in 1903 in Berlin: compass was to be five octaves from FF; the bass/treble divide was fixed at b/c’; stop names were standardised. This instrument was given the generic title (in German) of Normalharmonium to distinguish it from the Kunstharmonium (art-harmonium) which denoted the pressure type we have discussed in preceding articles.

By the early 20th century then, the harmonium had achieved maturity of design and established its place in the musical life of its time. The composer whose artistic personality most coincided with this product of the late Romantic era was Sigfrid Karg-Elert (1877-1933). His works for harmonium exceed those of any other composer in number and diversity and show an astonishing affinity with its expressive capacities. He wrote “I devoted the best years of my life to the harmonium” and in comparing the pipe organ with the harmonium with reference to his Seven Pastels (Lake Constance) said:

“This is certainly not the ideal organ style, for the limitations of the instrument as a medium of expression must cause much to be lost. Much more can be accomplished on the art-harmonium with percussion, double expression, double key-touches, with many tone-colours and polydynamics to each touch.”
(Letter to Godfrey Sceats)

1903 saw Karg-Elert’s first published work for harmonium (Six Sketches Op. 10) and in the years up to 1914 a large number of his opus numbers were dedicated to the harmonium, many of which were subsequently arranged for organ. Indeed, it was Reger who recognised Karg-Elert’s talent and encouraged him to compose for pipe organ. This period in the composer’s output offers us a sumptuous sound-picture of the twilight of Romanticism and the rising currents of impressionism and expressionism: Debussy and Schoenberg were acknowledged and admired, but Grieg was his greatest inspiration, the “unforgettable guiding spirit” upon whose death Karg-Elert composed the final piece of his Intarsien Op. 76 (Vor dem Bildnis Griegs).
The 15 pieces which make up form an excellent introduction to Karg-Elert’s harmonium works. They are character pieces which are also studies in tone colour using the individual and combined stops of the “einfach-expressiven Harmonium” (simple four-row harmonium). Each requires an advanced level of control of expression to make its effect, however ‘simple’ the instrument may be! Illusion (No. 14) offers an analogy with string playing – the composer describes this as a viola solo (LH) with violin accompaniment:

A few bars later the set 4 treble and set 3 bass double at the unison, giving an effect of great delicacy: 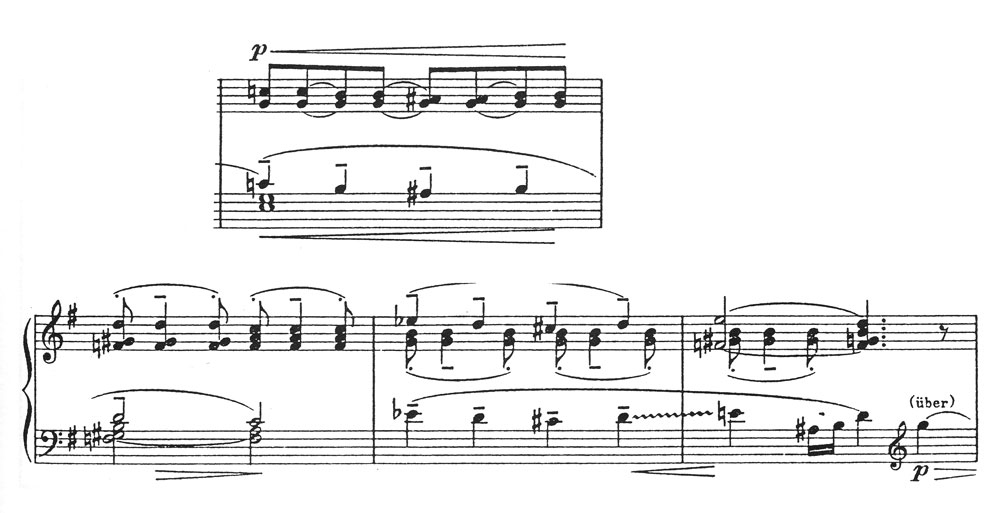 Karg-Elert writes about this piece: “A small amount of wind (Wenig Wind) is the watchword! Very small expressive means are required (technically through toe movement and springiness of the ankle joint, not knee or thigh movement which give too much accent or crescendo. As to the contents, perhaps one comes nearer to this little piece if one imagines a sun-drenched meadow, the sight of a blue, cloudless sky. Through the soul which escapes from the world passes a dream of light, sun and pure warmth … upwards to the blue light…”

Similar full descriptions of the ‘programme’ of each piece are also found in the Sieben Idyllen Op. 104, one of several collections from around 1914 written either expressly for suction instrument, or, like the Impressionen Op. 102, supplied with registrations for both suction and pressure systems. Wolken über See (Clouds over the Sea) from Op. 104 is likened by the composer to Schoenberg in the “inexorably severe logic of the part-writing and harmonies”. The held chord (representing the sea) is achieved by means of weights or small wedges to hold down the keys:

The peaceful picture is disturbed by a threatening build-up of turbulent clouds which seem to turn the sea into a black abyss; finally the clouds disperse and the evening mist descends. In this miniature Karg-Elert captures the expressive world of German post-romanticism to perfection.
On the other hand, the harmonium was for Karg-Elert a medium for the grandiose and heroic as much as for the intimate. His Second Sonata Op 46 is a work of symphonic dimensions and Reger-like virtuosity, with its opening Enharmonic Fantasy and double fugue based on the B.A.C.H. motif:

One can scarcely imagine a more complete exploration of the colours and range of expression possible on the art-harmonium than is found in this masterpiece. Karg-Elert achieved through this instrument the truest expression of his musical sensibilities during those “best years of his life”.
What place has the harmonium found in music-making today? Jean Langlais and Gaston Litaize brought composition for the instrument into the second half of the 20th century, showing that the French never quite lost sight of the harmonium’s liturgical use. Living composers are rediscovering the free reed instruments as a medium for their music. Colin Huehns has written an Intermezzo (Theme and Variations) for the same instrumental combination as the Dvorak Bagatelles; though musically very different, the two pieces work well in the same programme. The Dutch organist and harmonium player Dirk Luijmes has commissioned a stream of new works in a stunning variety of contemporary idioms, which he has performed widely to win new audiences for the harmonium. There will clearly be a future for this no longer-forgotten instrument, as much as there is a fascinating past.

Details of CD recordings of works mentioned in this article -

How to obtain copies of pieces mentioned –